Having had a look at the vRA support matrix, next point to consider in a typical vRA deployment is the deployment architecture which I’ll briefly explain below

vRA is part of the VMware product set that recommends the use of a dedicated management cluster (along with vCD and NSX). This is important because the concept behind this is that a dedicated management cluster will isolate all the VM’s that make up the management infrastructure such as Active Directory VMs, vCenter & SQL server VMs, Monitoring VMs…etc. This separation provides a separate execution context from those virtual machines that provides end user accessible resources, in other words, compute VM’s / production VMs that actually run the business critical workloads. Such a separation inherently provide a number of benefits to an enterprise.

Within a typical vRA deployment, the management cluster would host the following vRA components

During the configuration of IAAS components, vRA will connect to various end points (such as a vCenter server instance that manages a number of resource clusters) and once an endpoint such as a vCenter instance is connected, a Fabric Administrator would create resource reservations for each cluster managed by that vCenter instance. Once these reservations are created, vRA typically assumes complete control over those clusters (resource reservations within the clusters) to be able to use those resource reservations as how it sees fit. This could present problems if you run your management infrastructure VMs (such as vCenter server and vRA appliances..etc.) in one of those same clusters as vRA will not take in to account the existence of other VMs in the same cluster, that was not created by itself. This could result in vRA deploying VM’s (based on IAAS request from users) which will affect the resources available for the management VMs with a  potential to affect performance of both the management VMs and production VMs (created by the vRA based on blueprints). It is therefore typically recommended that you keep all resource / compute clusters separate from the vRA management VMs and under the full control of vRA itself (no manual creation of VM’s in the resource clusters).

An example high level design where vRA along with VMware NSX is deployed using a Management cluster could look like below. 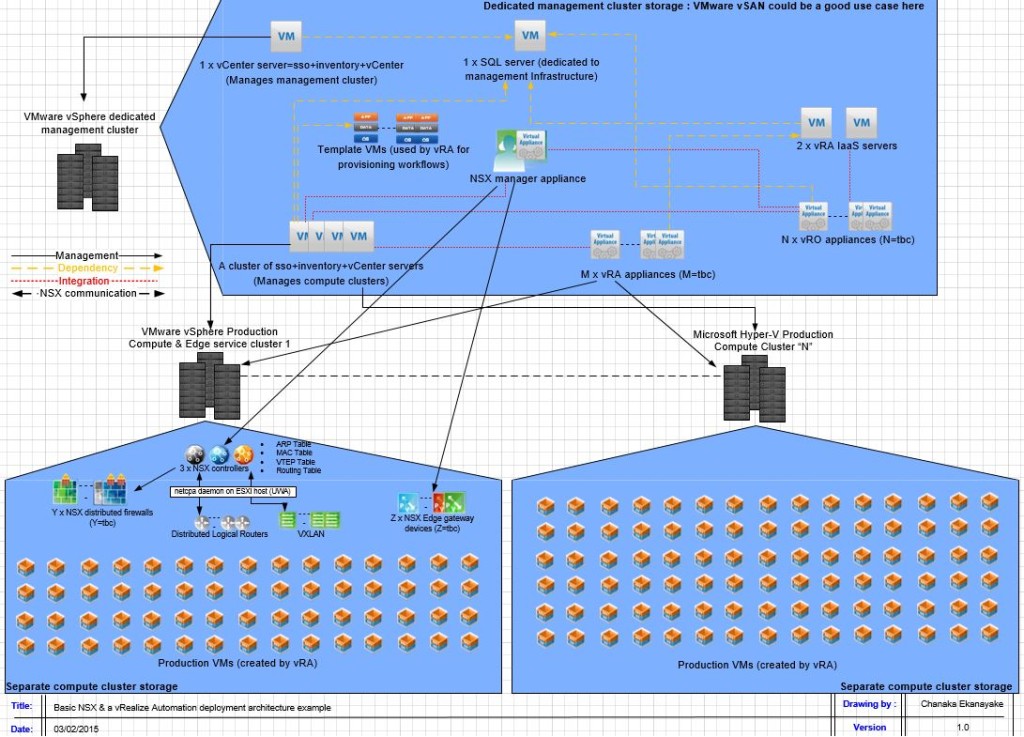 Technologist, lucky enough to be working for a very technical company. Views are my own and not those of my employer..!